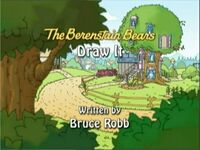 Brother is pretty good at drawing faces, but he would like to be better at it. When given the chance, he joins Mr. Drewbeary's art class. To his disappointment, instead of drawing faces, the teacher has them drawing circles and squares instead. It's only through helping a younger cub learn the importance of practicing stance and posture in order to hit home runs better that Brother realizes the same goes for drawing where he too must learn the basics before going onto the next step.

Differences From the Book