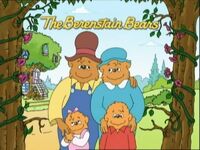 The Berenstain Bears is a Gemini Award- nominated animated series based on the children's book series of the same name by Stan and Jan Berenstain. The series follows the lives of a family of anthropomorphic bears who learn a moral or safety-related lesson during each episode.

Although most of the earlier episodes in the series were based on the book series, later episodes were not based on any of the books. The series debuted on January 6, 2003, along with George Shrinks and Seven Little Monsters and ended on September 10, 2005. Although PBS Kids did air reruns of the show the next three years.

The series is set in a world populated only by anthropomorphic bears and primarily follows around the Berenstain Bears, a family residing in the rural community of Bear Country consisting of Mama Bear, Papa Bear, Brother Bear and Sister Bear. Albeit numerous episodes are based on the books and promote the same morals as encouraged in the picture books from which their plots originated, the program's faithfulness to the original series is slightly blended on statement of a list of later episodes focus original storylines. Nonetheless, they mostly portray the same environment depicted in the original Berenstain Bears storybooks quite accurately and concentrate on the messages and lessons learned by the family through their new experiences, such as gratitude and responsibility, as well as the daily lives of the bears.

The show was produced by the Canadian animation studio Nelvana Limited for the PBS Kids block, and the Treehouse TV channel. 80 15-minute episodes were produced.