Berenstain Bears Wiki
Register
Don't have an account?
Sign In
Advertisement
in: Characters, The Too-Tall Gang, Bullies,
and 9 more

The Too-Tall Gang is a group of bullies led by Too-Tall Grizzly. They are well known for their mischief and troublemaking. They have been involved in smoking and drug dealing. Too-Tall Grizzly is the clear leader of the gang and the other members are somewhat afraid of him. The Too-tall gang frequently bullies new and unpopular cubs at Bear Country School.

The second-in-command of Too-Tall's gang. He wears a whoopee cap (a crown-like hat) and a green jacket. In the books, he doesn't talk as much as Too-Tall, but can be just as ruthless. In the 2003 cartoon, he tries to be sarcastic and ironical sometimes but tends to come off as more annoying.

The silly one of Too-Tall's gang. He wears a baseball cap, sometimes in a sideways position, and likes to build model airplanes in his spare time. He will sometimes actually have a "smirk" on his face. In the 2003 cartoon, he and Skuzz are seemingly closer to each other than they are with Too-Tall, since they have a lot in common personality-wise, as they are both follower-types, and have awkward moments. Smirk is however more boisterous than Skuzz. He seems to be less intelligent than Skuzz, and has some dumb moments with comical results. He is also, instead of Vinnie, the dumbest member of the gang.

The most dim-witted member of the Too-Tall's gang. He wears a snowcap on his head similar to a skater, though only for looks. He does not understand much of the sarcasm from the rest of the gang and is often the one that Too-Tall teases when no one else is around. In the 2003 cartoon, he only made occasional appearances and never talked. His name was also never mentioned.

A member of the Too-Tall gang. He wears a beanie-like baseball cap with an upturned visor in the First-Time books, and a sailor's hat and a sailor's suit in the chapter books. His appearances are very limited and he is not considered a regular meber of the gang.

A coloring book once misidentified Skuzz as Too-Tall.

Too-Tall is good with kittens--he actually lent Brother his hat to put a stray kitten in that Brother found. Too-Tall also gave Brother advice on caring for it. This redeeming quality of Too-Tall's came as quite as surprise to Brother. He is also a skilled dancer.

Skuzz is the only character in the books shown being high. While he was high, he stole Queenie's bicycle, did "wheelies", then crashed it into a parked police car. He was then taken by ambulance to a hospital, and when Brother and Sister visited him, he refused to admit he took any drugs. It was later revealed that it was Too-Tall that gave him the happy pills, though he didn't seem to mean Skuzz any harm.

Skuzz's jacket color has changed sometimes. One color was red, another green, and another blue. His hat is usually gray, but it was also a light blue before.

Vinnie has the sharpest nose of the gang.

Skuzz seems to have more or less dislike for Queenie, since he was shown frowning at her after she got mad at Too-Tall, he called her "fickle" behind her back, and he was upset at Too-Tall for voting for her at school.

Too-Tall and Skuzz are close to each-other, while Smirk and Vinnie are close.

Too-Tall feels pride after Brother raves about his singing.

The Too-Tall gang as they appear in a chapter book.

Too-Tall in a disguise at the Pizzeria Restaurant with Queenie McBear by Surprise. 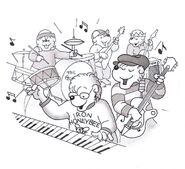 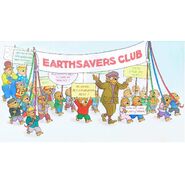